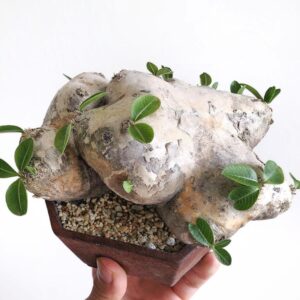 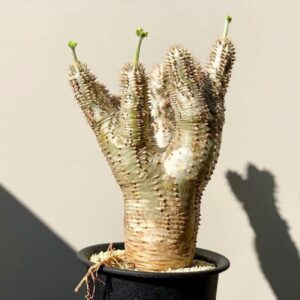 Pachypodium eburneum is a small growing cauduciform plants that looks somewhat like Pachypodium densiflorum but with much heavier spination and more blunt leaves. Seedlings grow fairly slowly and mature specimen are fairly compact up to 25 cm in diameter and the whole plant barely 25-30 cm tall.
Derivation of specific name: Its name alludes to the large showy ivory colored flowers which do not revert to yellow in cultivation.
Caudex and branches: Smooth silver with a light green tint with short thick arms. The trunk is covered with heavy conical spines that occur in pairs and form a stair step pattern around it.
Leaves: Obovate, more blunt than in densiflorum, medium green with a light middle vein and symetrical veination. The leaves will drop soon.
Flowers: Large, showy, ivory colored with a yellow tint in the center throat on long peduncles. Each peduncle bears about 6 (or more) flowers. Flowers will set in the second year in good conditions.

Origin and Habitat: It comes from a tiny isolated area in the Mount Ibity region in central Madagascar (province of Antananarivo). Pachypodium eburneum is known from two subpopulations (Ibity and Andranomangatsiaka). One of these has been extirpated and the remaining subpopulation is not located within a protected area. It has an area of occupancy of 9 km2 and it has one location. The total number of individuals in probably under 100 but the number of mature individuals has not been quantified. It may now be extinct in the wild.

Altitude range: 1,500 to 1,999 metres above sea level.
Habitat and ecology: Pachypodium eburneum grows in subhumid woodlands and on inselbergs or rock faces on quartzitic rocks. This species can be found with these associated species: Pachypodim brevicaule, Pachypodium densiflorum, Uapaca bojeri, Aloe capitata and Sarcolaena oblongifolia. In addition, the species experiences continuing decline due to illegal collection for the horticultural trade and loss of habitat caused by annual wildfire. It is therefore assessed as Critically Endangered