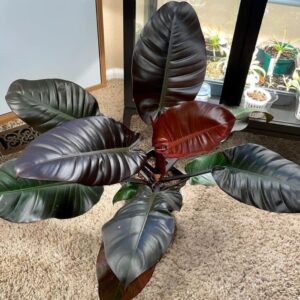 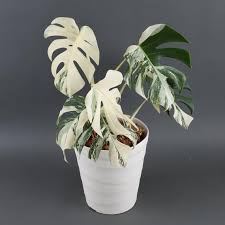 The Thai Constellation or variegated monstera is a tropical plant native to Southeast Asia but can be found in similar climates around the world. Known for its rarity and beautifully patterned leaves, this plant is similar to its all-green sister (monstera deliciosa) in terms of watering and lighting requirements.
Questions? Request a Call Back

Monstera deliciosa, commonly known as the Thai Constellation Monstera or just the Thai Monstera, is one of the most stunning houseplants you can find in home and garden stores today. The problem? There’s some conflicting information about this plant out there, which can lead to confusion and buying an unhealthy plant. Below, we’ll take a look at what makes the Thai Constellation Monstera so special, its many names and how to properly care for it in order to make it live long and prosper.

The Thai Constantine Monstera is a member of the Araceae family, which includes plants like Philodendron and Anthurium. These plants are commonly found in tropical environments, such as rainforests, but they can also be found in warm regions of North America. The plant is characterized by an upright stem with a large number of leaves that grow outward from the main stem. As the leaves mature, they curl up at their ends to form a distinctive constellation pattern around the central stalk. This patterning is what gives this plant its name: if you were to cut through one of the leaves and spread it out, you would see that there are many little sections that look like stars surrounding a larger circle in the center. The Thai Constellation Monstera has long been admired for its beautiful appearance, but it’s also known for being notoriously difficult to grow due to how sensitive it is to temperature changes. If the air or soil gets too hot or too cold, it will die quickly. To help combat this problem, growers will move these plants indoors when temperatures get colder than 60 degrees Fahrenheit (16 degrees Celsius) or hotter than 95 degrees Fahrenheit (35 degrees Celsius). In fact, because of how delicate these plants are, most nurseries only sell Thai Constellation Monsteras during spring and fall.

Where do they come from?

The Thai constellation monstera is an unusual plant. It’s not your typical house plant, and it’s certainly not the most well-known. Yet, this plant has a rich cultural history in Thailand and is typically used as an offering to Buddha statues or spirits. So what is this mysterious and unique plant? And how did it get its name?
The Thai constellation monstera (Monstera deliciosa) originated in Southeast Asia. But its origins are believed to be from Central America, where it is called M’angguhia in the native language of Melanesia. There have been reports that the Portuguese may have brought the plants back with them after sailing through Malaysia during their expedition in 1512.
This variety of monstera can grow up to 5 meters tall and can weigh more than 500 kg. As you would expect, the leaves are large and heart shaped; they grow up to 4 meters long! They come in shades of green ranging from dark to light, with prominent white veins running down each leaf. The vines also produce vibrant flowers that come out during nighttime hours only once per year.
The flower is said to resemble a lotus flower, which symbolizes purity within Buddhism culture.

How to take care of them?

The Thai Monstera is a vine-like plant that can be grown to cover an entire wall or ceiling. It does well in low-light environments, so it’s perfect for your bedroom, office, or other place with little natural light.
It also loves water and humidity. If you want to grow one indoors, mist the leaves frequently and keep the soil moist at all times. Keep in mind that this plant may need to be watered as many as five times per day if it’s in a sunny spot. Additionally, they prefer loose potting mix over gravel (such as what you might use in a fish tank). To care for this plant, try following these easy steps:
1) Remove any dead leaves by pulling them away from the center of the plant. Dead leaves are brown and brittle on top while green underneath; they usually fall off easily when touched.
2) Cut back any stems near the top that have outgrown their space or been pruned too hard. Cut back any side shoots on either side of those stems too!
3) Place pots containing Thai Monstera plants near each other because they enjoy being surrounded by others of their kind. Be sure not to overwater them, especially during winter months when less sun means less watering needs. One way to tell if your plant needs water is to gently squeeze some of the dirt between your fingers. If it sticks together and doesn’t form small crumbs then it probably needs water. 4) Finally, give this houseplant plenty of love! When its soil has dried out enough that it feels dry but no longer powdery, sprinkle some more fresh potting mix into the pot around the edges first before filling up the rest with water.

Reasons why you should buy this plant?

Where can you buy it?

This plant has many different names, including ‘starry vine’ and ‘star fruit’. In Thailand the Thai call it ‘Petch Manee’, which translates to Star Cluster. There are a few theories about the origins of this plant. One is that it came from India and was brought over by early traders. Another is that it originated in Malaysia and was introduced to Thailand by King Chulalongkorn (Rama V) during his reign. Whatever the case, this intriguing plant can now be found all over Thailand as well as in other countries such as England, Japan, France and Australia.
The leaves of the Petch Manee are glossy green with dark purple veins running up each leaf’s center. Along with its appearance, another thing that sets it apart is its name: It’s not just called a Star Vine or Star Fruit but also Constellation, which is an indication of how difficult it would be for you to find if you were looking for one on your own. It typically only blooms between November and March; when blooming starts, there will be small white flowers everywhere!

The Thai Constellation Monstera is a mysterious plant that grows in Thailand. It’s one of the most exotic plants around with vibrant colors and intricate patterns on its leaves. If you want to grow your own Thai Constellation Monstera, here are a few things you should know before you order one online:
-The plants grow up to six feet tall and need at least three hours of sunlight each day.
-They don’t like temperatures below 50 degrees Fahrenheit, so be sure to keep your plant inside during the winter months.
-Their roots can take time to establish in their new pot, so be patient while they adjust to the change in environment. -Don’t forget about your favorite fertilizer. We recommend using a diluted liquid fertilizer for best results every two weeks, or a slow-release fertilizer every four to six weeks.
-Keep an eye out for pests such as aphids or white flies, which can happen if the plant gets too much water or not enough sun.
-If you’re looking for more information about growing this unique and rare plant, we recommend visiting Thai Constellation Monstera website!

The Thai Constellation or variegated monstera is a tropical plant native to Southeast Asia but can be found in similar climates around the world. Known for its rarity and beautifully patterned leaves, this plant is similar to its all-green sister (monstera deliciosa) in terms of watering and lighting requirements.

If you love trendy houseplants, then you’ve got to check out the These beauties are very popular right now and probably will be for a long time. Thai Constellations have the classic Monstera leaves, but theirs are variegated.

The leaves have cream and green marbled patterns, a mutation caused by a lack of chlorophyll. The cream-colored splatter on its green leaves resembles a starry night sky, which gave it the name “Constellation.” But because we deep dive into Thai Constellation Monstera care, let’s talk about where it came from.

The Thai Constellation is a yellow-to-white-variegated Monstera Deliciosa that was first developed in a laboratory. Specifically, it was developed in a tissue culture laboratory in Thailand, hence the name.